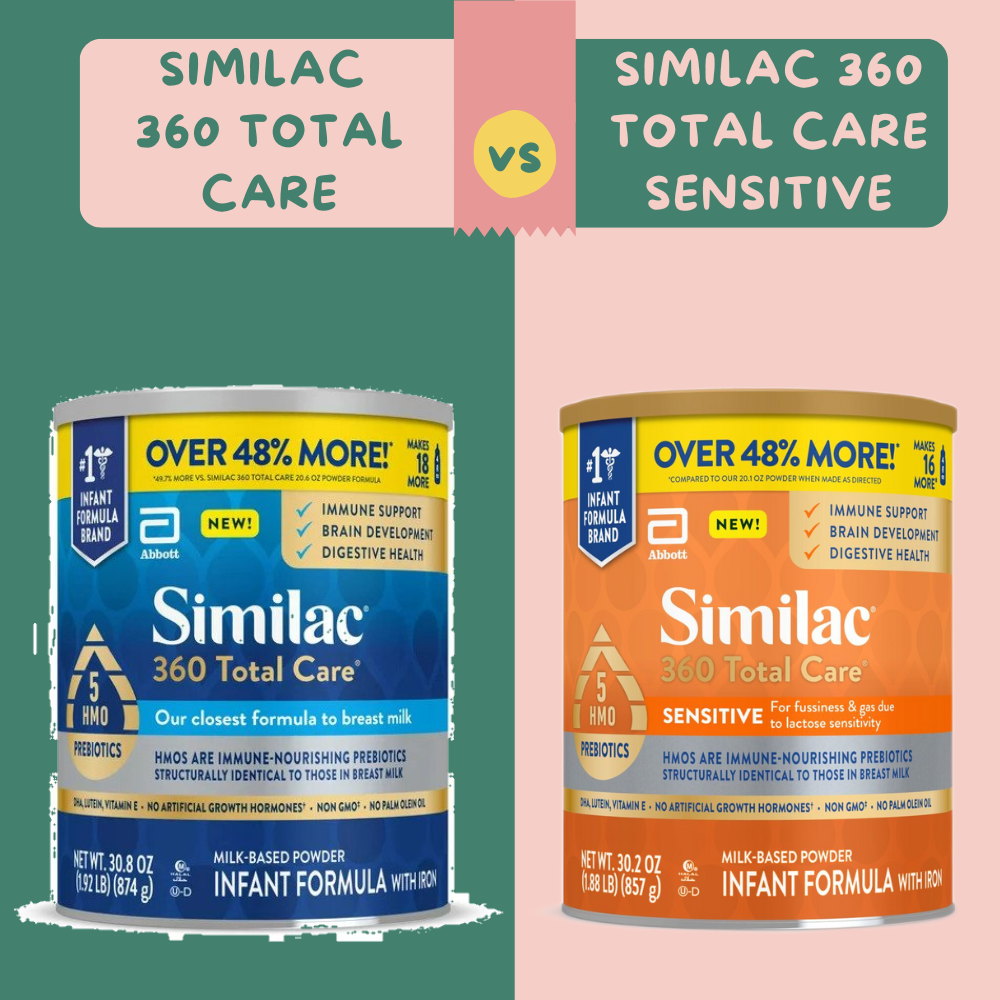 Similac 360 Total Care is a standard milk-based formula for babies with no health issues made from nonfat milk + whey protein concentrate and 100% lactose, also it has 5 HMO prebiotics to help digestive health whereas Similac 360 Total Care Sensitive is a lactose-reduced formula designed for babies with fussiness and gas due to lactose sensitivity.

In this article, we will see a complete comparison between these formulas in terms of mom’s reviews, ingredients, nutrition, and price. Stay with me!!

According to mom’s reviews, 360 Total Care, like other standard milk-based formulas, has a good taste and is easy to digest, also it has 8fl oz bottles which are perfect to carry with you. However, it’s expensive compared to regular milk-based formulas.

Similac 360 Total Care has nonfat milk + whey protein concentrate as a protein source like all standard milk-based formulas with a whey-to-casein ratio of 48:52.

In contrast, Similac 360 Total Care Sensitive has milk protein isolate as a protein source, it is different from cow’s milk, a protein product extracted from skim milk powder filtered to remove all or most of the minerals and lactose in it to be easy on sensitive tummies.

The whey-to-casein ratio of this formula is 20:80 whereas the average ratio in breast milk is between 70% to 30% and 80% to 20% in early lactation and 50% to 50% in late lactation. Casein is digested slowly by the body contrary to whey protein.

Similac 360 Total Care uses 100% lactose as a carb source with no added sugar whereas 360 Total Care Sensitive reduces lactose to 2% and the rest is from corn syrup and sugar. Almost all Similac’s Sensitive formulas have added sugar as a sweetener because they don’t have lactose which is a natural sugar.

Both formulas have 5 HMO prebiotics to promote digestive health which is a plus for them because until now no baby formula brand in the USA has 5 HMO prebiotics, Thus this is the reason why they are expensive.

Prebiotics are food for probiotics (good bacteria), a well-fed probiotic will keep your baby’s gut healthy.

« HMOs are special prebiotics found naturally in a mother’s breast milk. They are the most abundant solid ingredient in breast milk after fat and carbohydrates. In breastfed babies, HMOs are scientifically shown to positively affect the microbiome. » says nutritionnews.Abbott

Related: Enfamil Infant Vs Similac 360 Total care: Which One is The Best?

In terms of nutrition, Similac 360 Total care has more fat than 360 Total Care Sensitive whereas the latter has more protein and carbs, calcium, phosphorus, and sodium levels.

The table below shows a full comparison between these two formulas in terms of nutrition:

In terms of price, both formulas are expensive compared to other formulas, but if we compare the price between these two, we find that 360 Total Care is slightly cheaper which is normal because 360 Tota Care Sensitive is lactose-reduced and has milk protein isolate as a protein source.

Related: Best 14 Easy Ways to Save Money on Baby Formulas!

About switching between them, the safest switch you can do is from 360 Total Care to Sensitive. The opposite switching can only be done in case the baby has recovered from lactose sensitivity.